My research focuses on understanding how strain is released across faults (within damage zones), along-strike (slip variability), and with depth (the shallow slip deficit problem).

How is Co-seismic Deformation Distributed Across Fault Zones?

As an earthquake geodesist, my recent research has focused on resolving near-field deformation patterns of large-magnitude, strike-slip earthquakes using optical image correlation and lidar differencing, areas typically difficult to measure with standard geodetic techniques (e.g., InSAR or GPS), or field surveys. These methods combined with InSAR and GPS provide a powerful tool-set with which to study the diverse range of tectonic surface processes, and when coupled with inverse methods give a better understanding of the mechanically complex behavior of faulting at depth. 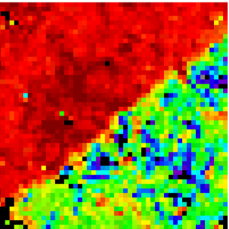 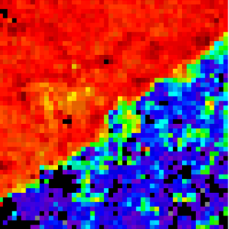 My doctoral thesis involved understanding how shallow co-seismic slip is distributed at the surface across damage zones and how the amount of inelastic, distributed deformation varies between different fault systems.

To precisely measure the full co-seismic surface deformation pattern, I use the software COSI-Corr (Coregistration of Optically Sensed Images and Correlation), which allows for measurement of surface motion to subpixel precision using images taken before and after an event. This technique is unique in that it works best where the displacement signal is largest, and is thus complementary to InSAR which typically decorrelates in such regions. Using 1-m-resolution air photos taken before and after the 1992 Mw 7.3 Landers and 1999 Mw 7.1 Hector Mine earthquakes, allowed for spatially dense measurement of co-seismic slip, the magnitude of off-fault, diffuse deformation and the width of the shear zone. These measurement revealed that both earthquakes exhibited large amounts of inelastic strain, 47% of the total surface strain was distributed for the Landers event over average widths of 156 m, compared to 38% distributed deformation over 121 m wide fault zones for Hector Mine (Milliner et al., 2016b).

What is the significance of along-fault slip heterogeneity?

The along-strike heterogeneity of co-seismic surface slip has been an interesting and hotly contested issue for the past 20 years (e.g., McGill and Rubin, 1999). The detailed correlation maps of the Landers and Hector Mine earthquakes acquired from the same aerial optical sensor meant we could resolve surface motion to the same resolution and accuracy, thus allowing us to address this longstanding issue. We found that surface slip followed a self-affine fractal distribution, and was interestingly statistically rougher for Landers than Hector Mine at all observable length-scales (Milliner et al. 2016a, Nat.Sci.Rep). We attributed this to Landers having a hierarchically, geometrically ‘rougher’ fault system, a behavior consistent with recent quasi-static and fully dynamic numerical simulations (e.g., Dieterich and Smith, 2009). Figure 3. Analysis of co-seismic slip variation. (top) Slip profiles for (a), Landers, and (b), Hector Mine, shown by the black line. (middle) Power spectral density of the slip profiles for (c), Landers, and (d), Hector Mine. Both profiles follow fractal distributions with no characteristic frequencies, red line delineates the corner frequency which is determined by the rupture length (which the fundamental mode cannot exceed), green line shows the linear least-squares regression. (e,f) Bandpassed components of slip profiles at specific wavelengths, which illustrates how amplitude of slip progressively diminishes with shorter wavelengths, a characteristic of a self-affine fractal distribution. Milliner et al. 2016a, Nat.Sci.Rep

How Does Co-seismic Slip Vary with Depth (“The Shallow Slip Deficit” problem)?

In another study I explored how near-field optical correlation data could improve estimates of slip at depth with finite-fault inversions. Coupling the optical correlation results with InSAR and GPS, in a collaborative effort with a group at Scripps we re-performed the slip inversions for the Landers and Hector Mine earthquakes and found that the shallow slip deficit (the notion that surface slip is systematically lower than that at the 3-6 km depth), was in fact largely an artifact. We found that including near-field data provided by the optical correlation technique, along with improved phase unwrapping reduced the shallow slip deficit by up to 49%, fundamentally altering our understanding of the spatial distribution fault slip across the rupture plane. Since September of 2016 I have been working with Roland Burgmann on processing GPS, and using advanced InSAR techniques such as split band-width range offsets and azimuthal offset tracking to quantify surface motion of the 2016 Mw 7.0 Kumamoto earthquake. We have found from our crustal inversion models, that transient, aseismic slip preceded and likely triggered the mainshock. Furthermore, from the continuous GPS network we could detect significant post-seismic afterslip and longer-wavelength viscoelastic relaxation, allowing us to probe the rheology of the lower crust.